Return to Toponyms in Linear A Texts. 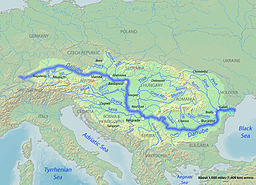 Witzel [2005:93] states that “[it] is well known that place names, especially names of (larger) rivers, are very conservative. Even today they may reflect languages spoken many thousands of years ago.” His examples include the Danube, from L. Danubius < PIE *dānu. (river).  Cf. also the Eridanus (Gr. Ἠριδανός) in Italy.  Kuchi (or guchi) is a common Japanese suffix that is appended to river names. Ancient writers provide information about how the Danube delta has changed throughout history. While –ku.ti “gate” (i.e. mouth) is plausible, it is doubtful that the Minoans ended their journeys there. Dayton [1971: 60] states that the Danube and tributaries “constitute the shortest and easiest highway between Europe and the Near East. . . .” The Danube begins in Germany and passes though 10 countries before it enters the Black Sea on the Romanian coast. Among its principal ports are Belgrade, Budapest, and Vienna. McDonald [1967:378] confirms that “trade goods [have] emerged far inland in eastern and central Europe, generally north of the Danube and stretching from Hungary to Czechoslovakia.” Consequently, -ku.ti “gate” is more plausibly interpreted as the “gateway” (i.e. passage) to Europe.

Located in northwestern Romania, modern Dej lies at the confluence of the Somesul Mare and Somesul Mic rivers and at the crossroads of important highways.  The Romans are known to have mined the salt in the area.  However, the area’s significance to the bronze-aged Minoans is not clear. Nevertheless, the surname, 出路 Deji, underscores Dej’s importance as a major commercial crossroad.

Evidence suggests that Zile, located in north-central Turkey, has been inhabited since the neolithic age. Among Zile’s alternate names are Zela and Silla, which mean respected. According to Strabo, Zile was founded by the Assyrian queen, Semiramis, in the ninth-century BCE. Moreover, historians indicate that, by the end of the fourth-century BCE, Zile belonged to the ancient temple state of Pontus under Persian rule, which lasted for about 200 years. The Zela castle, which was built by Roman commander Lucius Cornelius Sulla, perhaps during the first-century BCE, houses the Amanos temple. Despite the historical record, the Minoan record seems to indicate that Zile’s temple history predates the city’s “founding” by 600 or more years.

It should be noted that PH 1 and the Phaistos Disk were concurrently discovered in Room 8 in the northeast corner of the Phaistos palace. The scholarly view that the Phaistos Disk is an import is supported by the manner of the disk’s storage and, perhaps, by the inscription on the accompanying tablet. It is possible that the disk was brought home as a “souvenir” during a trip that included a stop in or near Zile, Turkey, and that it was treated as little more than a curiosity.

Situated at the confluence of the Vah and the Kysuca rivers in northwestern Slovakia, Zilina has been inhabited since the Stone Age; however, not much is known about its history before the fifth century CE.  The Vah River is a tributary of the Danube in southern Slovakia. Cf.  Albanian vau “ford”; see Dardan Leka’s comment below, as it pertains to de.di above. See also da.ne.ku.ti.

The Privilege of Genius

"It is the privilege of individual genius to follow no system beyond a creative intuition."
.
Michael Ventris

Added to Lexicon B > a-na-re-u

11.04.19: Added to Similarities Between the Minoan and the Japanese Cultures > the chrysanthemum

Google Chrome and Mozilla Firefox do not require updates to display Japanese characters.
.
To update Internet Explorer or other browsers:
www.jref.com/japan/language/browser_display.shtml