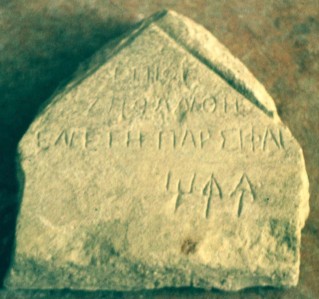 A yellow brick tentatively dated to the Roman period

The confusion regarding its provenience is among the many reasons for Ray Brown’s “proof” that this inscription is a modern forgery. Nevertheless, I maintain not only that this inscription is authentic but that it also belongs to a tomb. Consequently, disregarding alternate claims for provenience, I have taken the liberty to assign LB Psykhro (PSY) 1, to distinguish it from the LA designation, PS.

Sometime around 1958, the Heraklion Museum acquired this inscription from Stylianos Giamalakis, who is reputed to have made three conflicting claims about the inscription’s provenience: Psykhro cave, Amnisos, and the village of Ini.

Since then, this “Eteocretan” inscription has engendered much controversy regarding the seeming anachronicity of the alphabetic-Greek characters and the syllabic-Greek characters; the alphabetic characters are ascribed to the third century BCE while the syllabic characters are deemed a poor attempt to reproduce LA (ca. second millennium BCE). This supposed anachronicity is regarded as further support for the “forgery” theory. Forgery or not, I naturally could not resist the opportunity to play the devil’s advocate and to attempt a translation.

Nevertheless, I am inclined to ascribe the entire inscription to the Greek language rather than to the arcane Eteocretan language. As indicated below, the syllabic signs can be ascribed not to LA but to LB. Moreover, consider the dates of ICS 260 (ca. sixth century BCE) and ICS 427 (ca. fourth century BCE or later), two digraphic, LC inscriptions. Given the concordance of some words in both LB and LC (e.g. a-ta-wo and e-u-wa-ko-ro), it is conceivable that LB was still in limited use around the third century BCE and later.

Reading: “[Here lie] the gentle † supplicants of Zitantaš pierced by a sword (or † a spear) — the Council.”

Notes: My belief that this object is a tomb inscription is supported by a reference to its shape, which appears to have been designed to fit into the ανακουφιστικό τρίγωνο (anakouphistiko trigôno) “an architectural triangle” over the door of a small structure, such as a tomb.  Cf. the architectural triangle over the much larger “Treasury of Atreus“.  If I had access to this inscription, I would seek the empty triangles of tombs that are located in the claimed areas of provenience.

For lack of a closer alternative, ζηθανθη as an inflection of Zitantaš seems reasonable, so I am willing to surmise that two or more “gentle” supplicants were slain by sword and entombed. It should be noted, however, that a plausible root of ζηθανθη is ζητέω (zeteô) “to desire, to seek”; the Greek ζ (zeta) may be compared with our modern, question mark.  Cf. also ζητοῦντες (zêtountes) and MG ζητητές (zêtêtes) “enquirer, seeker”.  ζητητός (zêtêtos) and ζητός (zêtos) constitute that which is “sought”, whereas the MG ζητω (zêto) constitutes the “request”.

In his communication to Ray Brown on May 8, 1982, John Chadwick asserts that, in context, ἐνετή (enetê) “inserted” is “strained and scarcely acceptable”. I maintain that it is strained only because ξίφαι (xsiphai) “sword” for ΣΙΦΑΙ consistently has been overlooked in every translation.  Cf. ΣΙΦΑΙ with qi-si-pe-e [PY Ta 716], which is supported by a spear or sword ideogram.  However, while a sword may be “inserted”, the dative πὰρ (par) cannot be ignored; thus, a supplicant may be ἐνετή πὰρ ξίφαι “pierced by a sword”.

The Privilege of Genius

"It is the privilege of individual genius to follow no system beyond a creative intuition."
.
Michael Ventris

Added to Lexicon B > a-na-re-u

11.04.19: Added to Similarities Between the Minoan and the Japanese Cultures > the chrysanthemum

Google Chrome and Mozilla Firefox do not require updates to display Japanese characters.
.
To update Internet Explorer or other browsers:
www.jref.com/japan/language/browser_display.shtml